Old Postcards of Kranj and Its Surroundings (Slovenia) 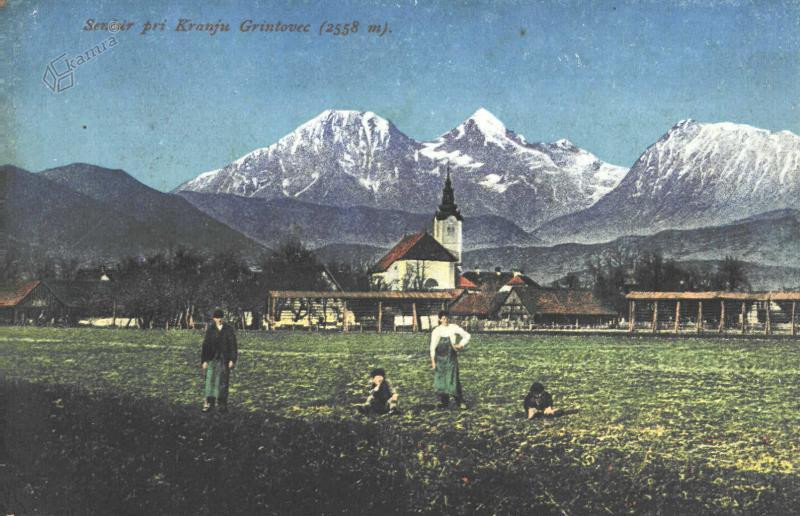 Gorenjski Muzej keeps a rich collection of postcards of Kranj and surrounding places (490 postcards). The oldest postcards have small images on the back in round, oval, rectangular and other shapes, decorated with characteristic vignettes, showing the place as a whole or just individual motifs.

Postcards have an important historical value, because they can be used to determine how the appearance of individual settlements has changed. They are an important cultural heritage, as they enrich our knowledge of the former city and surrounding places. They show us how urban areas have changed, which are no longer there today or are adequately or inadequately rebuilt and walled up. The economic and related urban and architectural development of Kranj has resulted in numerous, often regrettable changes in the old image of the city, which is nicely illustrated by old postcards.

Among the oldest postcards of Kranj are those that were sent in 1897 because they have a great documentary value. On the postcards of Kranj suroundings, bilingual inscriptions were often used, or only German, but sometimes also Slovene. On older postcards dominated German inscriptions, while on younger ones mostly Slovene ones. The number of postcards with motifs of Kranj has greatly increased in the last years of the 19th century, and especially in the decade before the First World War. The printing of postcards was fueled by interest in Kranj as a tourist destination, where the Society for Attracting Foreigners and Beautifying Kranj was founded before the First World War. The city had a number of cultural attractions and beautiful surroundings that allowed many excursions. In 1931, it was even declared a resort town.

Postcards were printed in various printing techniques, in addition to chromolithography, lithography (stone printing), light printing and book printing were also used, at the end of the 19th century, when photographic paper appeared, as well as postcards in photo technique.

In the decade before the First World War, postcards with motifs of Kranj most often depict the panorama of the town from Gaštej and Šmarjetna gora, with the unbuilt right bank of the Sava, with a wooden bridge and the nearby Majdič mill, and with numerous craft workshops. Above this rises the silhouette of the city with the dominant bell towers of the church of St. Kancijan and comrades, the Rosary and Punger churches. Khislstein Castle and the city walls are also recognizable on most of these postcards. The view of the area of ​​Kranj with Polak’s tannery at the confluence of the Sava and Kokra rivers was also popular.

Numerous postcards depict individual parts of the city, such as today’s Maistrov trg or Prešernova ulica with the house, where between 1846 and 1849 the greatest Slovenian poet dr. France Prešeren lived and died. A popular motif was also the Main Square with a fountain, which was erected during the announced visit of Emperor Franz Joseph in 1883. A rare document of the time are postcards that evoke the memory of the mood of a fair or market day in the city.

The motifs on the postcards from the nearby city area contain a view of Šmarjetna gora, which has always been a popular destination for Kranj people and other excursionists. A common motif on postcards is also Sv. Jošt with the church, the parish church and the inn. The oldest postcard of the surrounding willage Preddvor was sent on 18 May 1899. The inscriptions are in Slovene and German. An extensive collection of postcards shows the spa for tuberculosis in Golnik, which eventually developed into the largest climatic health resort for pulmonary tuberculosis in the country. The earliest postcard of the eminent estate Brdo near Kranj shows a pavilion on the lake from the time when the castle, e.g. from 1937 and 1938, when it was owned by the deputy Yugoslav prince Pavle Karađorđević.

The industrialization of Kranj partially changed the image of the city, and thus also the motifs on the postcards. Also popular was the view of Narodni dom, which was extended in 1924 according to the plans of the architect Ivan Vurnik, where all national societies got their premises, and the monument to King Peter I from 1926, which stood in front of it. The pride of the city became two new bridges, the concrete bridge over Kokra, and the suspension bridge over Kokra in the city, which was opened to traffic in December 1938.

Original source of this story can be found here.