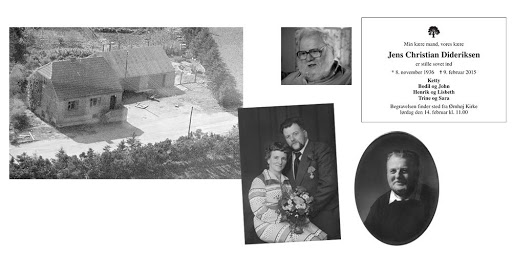 I was born in 1936, as the oldest of four siblings. My father was Lars Dideriksen, he was exceptionally skilled. He built quite a few houses. He did both masonry and carpentry just as well as any craftsman, even though he had never been formally trained. He also drove around to the farms with a threshing machine and threshed for people.

My father died of leukemia in 1946, only 39 years old, and my mother Katrine was left alone with us four children. She took a variety of jobs to manage, among other things, she worked as a meter inspector.

Although I was only 10 years old, I went to serve as a farmhand at Hans Grønbjerg. It was only a few miles from home. It was the only time I served before I was confirmed. After my confirmation, I came to work for The Danish Heath Society. To get a job paid by the hour, I had to have a certificate from the social authorities that I was a “deserving poor”. That was because my mother was alone with us children.

I helped to plant the Sandbæk plantation. At that time there were plans for Castenskjold to establish a fox farm in Sandbæk, but nothing came of it. We planted several different types of pine, mountain pine, Scotch pine, Frenchpine, Austrian pine and others. I think that all in all, hundreds of barrels of land were planted. I kept on working in the forestry business; for instance at the nursery in Røddinglund administered by the forest ranger Fuglsbjerg.

I also worked at Kiddal plantation. We took care of the forest, cleaning it up. We slept in a barrack. The work was led by Holger Jensen from The Danish Heath Society’s flying corps.

In 1959 I worked for a few months in the lignite basin east of Katrinelund, that was for the firm Kollmann and Bolet. We worked at a depth that ranged from 6 to 16 meters. The soil consisted mostly of clay, but there were many water pockets and it caused some landslides, but we saved ourselves every time.

As a boy, I had walked close to the many coal basins run at Tiphede at the time. Of course, it was dangerous for a boy to move around close to the basins, but one learned to be careful. It happened several times that I discovered cracks in the ground, indicating that there was a danger the brink might crash. I told the man at the hoist so he could warn the others. Of course, the workers were very happy to know so that they could get to safety.

I had been told that in the event of a landslide I should lie on my back, so I would slide down without being covered by soil. Usually only one meter of the brink would slide down.

My mother died in 1974, and I took over the house in Abildå in which we lived and which my father had built. It is located at Askovvej 23.

In 1990, as chairman of the residents’ association in Abildå, I was involved in organizing a lignite evening in the village hall. It was a very nice evening, many old coal workers came and there was an incredibly good atmosphere. Vagn Møller and Karlo Pedersen, both of whom were old lignite workers, told stories from the old days. It gave me the idea to create a lignite historical association.

In 1992 we opened a small coal basin. I got a few old lignite workers to make a hoist in order to raise up coal from the basin, similar to those used during the war. The two lignite workers were Vagn Møller from Abildå and Ejnar Kristensen from Brande. In 1993, we formed a lignite historical association, with the aim of collecting stories and objects from the lignite period and storing them for posterity, and also to make it possible for old lignite workers to meet.

I have inherited a forest of 6.6 hectares in Vinding, it was my uncle who thought it would suit me well. It proved very useful to me. Every year for Christmas I sold Christmas trees and greenery, and Ketty made wreaths and Christmas decorations. It turned into a small shop that we would open every year for Christmas. In addition, I also made and sold flag poles and fence posts.

In recent years I have had health problems, and in 2008 I got a blood clot in one leg and have been in a wheelchair ever since. In 2010, Ketty and I moved into a retirement home in Ørnhøj.