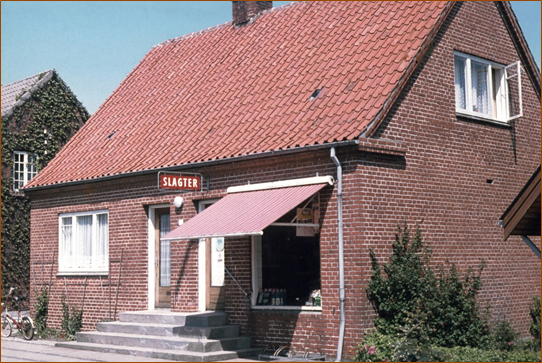 My father’s name was Andreas Skallebæk and he was from Vemb. My mother was from Baunbæk in Ulfborg. They first lived in Tusholt in Vinding, but around 1930 they moved to Ørnhøj. We were four siblings, Axel, Nanna, Vagn and Esther.

We lived in Søndervang 10. In the same house lived the Køhler family, and in the attic lived Jens Sørensen and his wife. We were a total of 11 people in the house. For many years, dad drove around selling fish, and my mother was an occasional cook and often helped at the hotel when there were major events.

It was during the occupation, and meat could only be purchased with ration coupons. At the beginning we had no refrigeration facilities, so in the evening the meat was loaded onto a handcart and covered and then driven up the Nørregade to the slaughterhouse, where it was stored in the cooler, until it was returned the next morning. Later Ølgaard Jensen had a cooling system installed. Because it was during the occupation, some German soldiers came and bought goods in the shop. Even after I moved from Holstebro I went back several times to help Ølgaard Jensen.

In Ørnhøj I worked several places as a maid, among other things I spent half a year at Ørnhøj Station with station manager Thorbøll. I was also at Anker Knudsen for some time.

In 1952, I married Søren Lundsgaard, who drove a coach from Ørnhøj over Tim to Ringkøbing.

In 1952 we lived in the apartment above Marinus Dideriksen. Søren sold the route, and we had the house built with room for a shop here at Søndervang. The work at Ølgaard Jensen had made me want to work with meat products. In 1955, I opened a meat sale in Søndervang. I bought the meat I needed in the store either at the butchery in Holstebro, Lemvig or Ansager.

When we built the house and Søren Ringkøbing sold the route, he started to drive a coach for Charles Nielsen in Spjald, later for Ørnhøjbanen and then for Ole Knudsen in Tim. He also drove for Møller in Ringkøbing and for Frede Christiansen in Ørnhøj.

After having had the store for 30 years, I closed it on January 1, 1985. We rebuilt the house and turned the store into a bedroom. Unfortunately, in 1987, Søren died only 70 years old.

Now it is almost 25 years since Søren died, and I still live here on Søndervang, where I have lived almost all of my life.