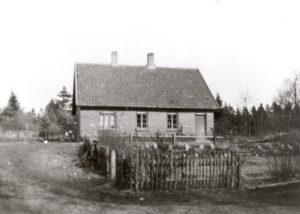 From the village of Arnborg, municipality of Herning

That the memory of Jens Provst still exists at all is solely the merit of H.P. Hansen. In the small book “Jyske originaler” (“Jutlandic characters”) from 1948, Hansen reproduces the stories that were told about Jens. Jens was born in Provsthuset in Birkebæk plantation and, like other residents for generations before him, was nicknamed “provst” (a “dean” in English, “provst” is a title in some Christian churches).

As a child Jens was already different from other children, he was self-willed and strong of his age. Jens learned to thatch and went from place to place, wherever he was needed. He was not afraid of authorities such as the vicar or the forest supervisor Dalgas of Birkebæk, whom he would lead by the nose during his illegal chases in The Danish Heath Society’s plantations. Nevertheless, he was employed as a laborer in the Birkebæk plantation at the time of the 1906 census, all while receiving old-age support. When he became a widower, the “dean” had to move into the Rind Poorhouse, where he lived until his death in 1914.

Photo of “Provsthuset” (the House of the Dean), current address Jens Provsts Vej 86